Get fresh music recommendations delivered to your inbox every Friday.
We've updated our Terms of Use. You can review the changes here.

Mankind is Carrion, Fit for Nothing 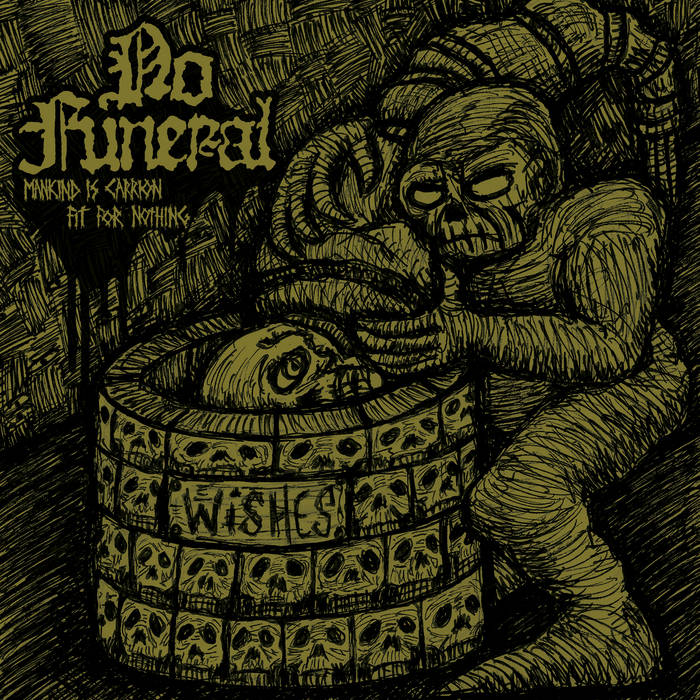 king_shit No Funeral blew me away with the Livid split but this is some serious next level shit!
Modern sludge is mostly just hipster trash, but these dudes are the REAL DEAL right alongside Grief, Noothgrush, Eyehategod and Buzzoven! Fuckin labels should be killing each other over who gets em first! FUCK!

heavymetalweatherman Just saw these guys destroy at the Hexagon Bar in MPLS, and the song "Carrion" was a standout from that set. Crusty, sludgy, doomy, tasty goodness. "FOR NOTHING...." Favorite track: Carrion.

Cassette limited to 50 copies (sold out)

To hear and/or download the 3rd song from the cassette version of this release go to: cvltnation.bandcamp.com/album/black-flag-my-war-the-cvlt-nation-sessions

"It’s no surprise that this EP is all about delivering a nasty visceral type of doom, like a wound that has a layer of crusted blood & mud covering it. Carrion’s disgusted sound is one of a band sick of everything wrong with the world. The slow eventually gives way to a faster, more riffy tune one that breathes life into the track.
The whine of feedback gives you a brief bit of time to recover before Hyperalgesia takes things down to even deeper & darker depths. Here the vocals become even more hate-fuelled while the sludgy riffs get the head well & truly banging.
An impressive offering".
-Games, Brrraaains & A Head-Banging Life Blog

"Even looking at the band photos, one can assume most things about this sound. I have been more than honest about my stance on sludge and doom as a whole and while I have an aversion to most of the genre, hearing well done sludge doom about Drug addiction, Nihilism, Depression, Death, and Misanthropy is more than welcome.
Mankind is Carrion, Fit for Nothing is the last EP of 2017 for No Funeral. This closes out a sparse year with only another split released with Livid. This is sort of disappointing as the band’s visual aesthetic of rough photocopied artwork is interesting when combined with the hateful music. It seems like this band gives no shits what you think and each release is a punch to the spine. Combine this with a generous use of soundclips within the music and one has everything that is expected from a sound that delivers on every front.
Perhaps I will move into exploring more sludge/stoner/doom in the new year as long as they retain the aesthetic which does not cross the border of parody. Perhaps I will get over my prejudice against slow music and just enjoy the aesthetic like other people. For now, I think I am happy with No Funeral as it is teaching me to get lost in a tomb of smoke".
-Tapewyrm metal

"This is the latest EP from US sludge metal band No Funeral. Having been introduced to No Funeral through their very enjoyable split with Livid, I’m pleased to now have this new EP to get to know them a bit more.
If you’re into this kind of thing then it’s easy to enjoy No Funeral’s brand of antagonistic, misanthropic sludge. Filled with doom’s misery and sludge’s infected bite, this is dark and visceral music, covered in sickening grime, ugly malevolence, and old hate.
The band have an ear for a good riff, pouring tar over it until it gets to the requisite level of sludgy heaviness. Underneath the murk you can detect traditional doom metal influences in some of these riffs too, which is a welcome thing to hear when combined with this kind of malignant sludge delivery.
The venomous vocals are delivered with throat-shredding passion and intensity. Here’s a man that doesn’t care that his screams might herald the end of the world.
The version of the EP that I have, (it doesn’t seem to be on all versions), also contains a scathing version of Black Flag’s My War. Top stuff.
This music is gloriously raw and underground, but, (importantly), with the potential to transcend this to the next level due to how good No Funeral are at what they do. If a band as wonderfully heavy and nasty as Primitive Man can get wider exposure, interest, and backing from larger labels/press/metal public, then there’s hope for a band like No Funeral too.
Highly recommended".
-Wonderbox Metal

"Surprise! No Funeral closed out 2017 with a new EP called Mankind Is Carrion, Fit For Nothing, and it’s the hatefully sludgy closer the year deserved. As for “Hyperalgesia,” it’s No Funeral continuing to move at a snail’s pace and completely flatten everything and anything that dares get in its way".
-The Pop Break

This four-headed monster from Funeralopolis blows since 2011, the darkest hymns of bitter Misantrophie in the pillory and also brings an imposing tail of a discography on the scales - certainly well guarded in the guise of the very well-known Diy label LIVE FAST DIE REC, also in Minnesota stationed.
Her latest sophistication, after a split with LIVID, is a venomous, wicked magnetic tape manifesto in the clunk of destruction of a steaming salt that shuffles through a china workshop.
The now fifth and almost winter-obsessed TTT article is now to deal with this, slightly different kicking, sludge madness, the NO FUNERAL here within about twelve and a half minutes of naked violence with malicious bass in the tone of rams such as FISTULA, GRIEF or 71TONMAN let go of you.
As tense as the tape may look and certainly sound, I'm not even sure if any of them ever left the States.
The full title of this clear EP; MANKIND IS CARRION, FIT FOR NOTHING; Immediately scored into my dusty skull back wall when I took a look at the simple but great cover artwork and let myself be carried away by the first notes of the opener CARRION. The viscous intro seeps through the speakers like incandescent butter and announces, just as in the style of the cover, a simple, but in its mere degeneration, such a monstrous escalation in tow speed, moving from just those down-tempi to more groovy parts unload deeply sung growls.
The partly dialogue-like alternating vocals are more than pleasant in selected parts of the rest of the quartet and do not miss a syllable, where you can attach to the first word either way, while deep, angry anger burns through the eardrums and Above all, the high, desperate vocals are able to scrape off every bone around.
At the latest with the hook every gnawed ear pair should go up and pull themselves up on every drop of these viscous verses, while the climax of this eruption is still barely hidden in ever-expanding duels between instruments and vocals. HYPERALGESIA, the second track in the league, is slowly warming up at this time to uproot more of what still seems to be standing.
Since this EP has 'only' two songs, I want to hold myself back, but still refer to the groove of which I have already spoken, because this one finds its strongest appeal to the above Trip commands.
HYPERALGESIA is a lot shorter than the first song, but with its sealed core of a board and its enthralling message, it totally outweighs it.
NO FUNERAL not only gave us and their audience a sharp chunk just before the New Year's Eve, but also a successful sequel to their four-track release in August of the same year and definitely rich fare for the rear of their split.
Both songs develop here in their powerful signature, but individually convincing and fit exactly the moment, in which I could no longer solve my eyes of a senselessly perverted corner of the room and my mind as inviting as possible for the lyrical sting and the instrumental-breaking scissors of this Minneapolis scorpion seemed to work.
Those who have not stumbled upon NO FUNERAL or LIVE FAST THE RECS can easily invest both their ears and some time on my warmest recommendations".
-TRVEFRYKT ZINE

Carrion + Hyperalgesia written and arranged by Kevin Pipkorn and No Funeral.
All songs recorded, mixed and mastered throughout 2017 at Beast Mountain Audio by Dinis DeCarvalho. Layout by H Pipkorn
7-inch artwork by Eric C Harrison

No Funeral are a misanthropic sludge band from Minneapolis, MN formed in 2011.

Hate, misery and disdain for the day to day shit have molded No Funerals songs into a soundtrack for loathsome scum.

For other Live Fast Die Recordings releases go to livefastdierecs.bandcamp.com

Email for booking, or any other questions. ... more

Bandcamp Daily  your guide to the world of Bandcamp

Hath frontman Frank Albanese stops by on a supersized, year-in-review edition of the Metal Show.